FIFA Football World Cup is held after every four years. In this tournament, globally recognized football teams compete against each other to win the championship title for their country. Each time a new country bids to win the hosting title of this sensational event.

This year, the 2022 FIFA World Cup has awarded the hosting rights to Qatar. Qatar, officially known as the State of Qatar, is an independent state on the west coast of the Arabian Gulf (Middle East). The Arabic country is home to people of different nationalities and ethnic groups.

As a result, Qatar is expected to face multiple communication challenges with the upcoming wave of football fans.

What Languages Are Spoken in Qatar?

The official state language of Qatar is Arabic, and most Qataris have a Gulf Arabic dialect that matches the dialect of surrounding states. Qatari Arabic is further divided into Gulf Arabic (also referred to as Khaliji/Qatari) and Standard Arabic (also known as Al Fus-Ha/Al Arabiya).

English, the second most spoken language in Qatar as the country, was once under the rule of British monarchs. Along with Arabic, children are taught English in school. The Qatari government has even encouraged people to use English as a second language (after Arabic). Therefore, Qataris use English to communicate with foreigners and tourists.

The third most spoken language in Qatar is Farsi or Persian. Farsi was first introduced into Qatari culture in the 1900s when Iranian migrated to this country as boat builders and workers. Since then, Farsi has spread it’s in the Qatar region.

Another dialect that is a massive part of Qatari culture is Urdu, as there are almost 117,000 Urdu speakers in Qatar. Apart from these main languages, people in Qatar also speak Malay, Balochi, Pashto, Hindi, Sinhala, and Nepali.

Arabs comprise less than 15% of Qatar’s population, as the country’s population belongs to other nationalities. 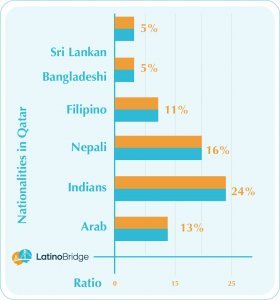 In FIFA World Cup 2022, 32 senior national teams compete against each other. As these teams belong to different regions and countries, there will be almost 20 languages-speaking players and viewers in the tournament. Therefore, FIFA officially airs each match in seven different languages: English, French, German, Arabic, Portuguese, Russian, and Spanish.

Moreover, the viewers will stay in Qatar during the tournament and enjoy the sights the desert country offers. That is why Qatar needs to take fast action and ensure that the tourists do not experience trouble in navigating the foreign streets and conversing with locals.

All the football lovers flying into Qatar to witness the 2022 FIFA World Cup would need a translator to correctly communicate their queries to the onboard aviation staff, such as cabin crew. They will also require assistance locating their flights, luggage, and terminals.

According to a recent report, Oman Air and Qatar Airways have signed a flight agreement for transporting football enthusiasts between two capitals, Muscat and Doha. Both airlines may use aviation translation services to ensure airway safety demonstrations and other important instructions are delivered in all 20 languages to ensure that every passenger onboard understands the safety measures. The translation services may also be used in the airports to translate the signs and other instructions.

The translation and localization services can be used to translate food menus, room numbers, and directions signs to facilitate everyone.

About 1.2 million people are expected to visit Qatar to enjoy FIFA World Cup 2022. Some of those visitors are bound to run into a healthcare crisis. That is why, the healthcare industry must be ready to correctly interpret the concerns of patients to provide them high quality healthcare. Qatar may have to implement translation guidelines to mitigate the language barrier. This can include translating medical handbooks, translating audio and video content, and providing on-site interpreters to effectively communicate with tourists.

Language Concerns to Address in Stadium and Streets

Currently, Qatar has street direction signs in Arabic and English. However, the country is trying to ensure that signage in other languages is available so tourists do not have trouble navigating unknown roads and streets. For this reason, the country’s government is taking assistance from translation and localization services to ensure there is no miscommunication among the visitors.

Meanwhile, in the stadium, the screens may show subtitles in the language of the team playing on the field. The signage may also be updated to make it easier for fans to locate their seats and enjoy live matches without any hassle.

Qatar has promised fans that they are it will provide the best-connected football tournament experience to football fans. The action plan to achieve this goal is to engage the audience by using different communication methods. The country is expected to use voice technologies for translation, sign language, and braille translators to provide the best experience to even differently-abled people.

To bridge the communication and language gap, FIFA supplies translators and volunteers from their individual language services departments to translate the instructions and information for upcoming matches. The translation department will also cover the translation of the live commentary of each match of this global event.

In addition, these translators will be present during after-game player interviews and accommodate the visitors navigating the hospitality industry.

The 2022 FIFA World Cup Qatar has caused quite a stir worldwide as football fans are excited to see whether their country will bring home the cup. However, the diversity of fans will also create language issues for different industries, such as healthcare and hospitality. Therefore, the country will take advantage of localization and translation services to move past communication barriers.